Last month Shana and I stopped in at Big Lots because they had gel-filled chef mats on sale and I wanted a bunch of them.  Turns out it was their International Foods sale as well.  Shana loaded up on her fav Euro-cookies and I went with imported priest stranglers and little ears.  That's pasta actually- strozzapreti and orrechiette.  Then I spotted a jar filled with a bright red something and had to check it out.  Ajvar.  No idea.  The ingredients list said sweet red peppers, eggplant, garlic, olive oil, vinegar, and salt.  Seriously.  Nothing I couldn't pronounce and a use within 4 days of opening warning.  That's my kind of ingredients list.  Since we are eggplant lovers I snagged a jar. 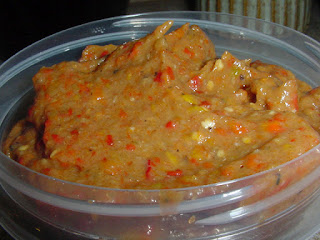 So much greater than the sum of its ingredients would suggest!

Ajvar (pronounced EYE-var) is a Serbian staple, made in the fall when sweet red peppers and eggplants are at the height of their harvests.  Piles of eggplants and peppers are smoked over open fires until their skins blister and blacken.  Then when cool the char is stripped off and the soft fruits are mashed and mixed with garlic, olive oil and vinegar.  We fell in love with the sweet smokey flavor and ate it straight from the jar, spread on sandwiches, stirred into pasta, slathered on fish and poultry, added it to hummus, and scooped it up on flatbread.  Michael and I liked this way better than our attempts at making Baba Ganoush and decided to add it to our ways to preserve eggplant list.

Ajvar can be made as spicy as you prefer.  Since Serbia is at the crossroads of central and southeast Europe and neighbors with Hungary, Romania, and Bulgaria, I would make the (probably wrong) assumption that paprika peppers probably play a big role in Ajvar.  And if I have enough paprikas growing at some point I may make a batch using just those peppers.  Since my peppers are just now starting to ripen to red (and yellow, and orange) I used a mix of red Corno di Toros, a yellow Carnival Bell, and a partially yellow Golden Treasure.  If I had had all reds the finished product would have been the color of the spread I bought.

Directions
Preheat your grill or the broiler of your oven.  Place eggplants and peppers directly on the grill or, if using the broiler, on a foil lined cookie sheet.  Place the garlic cloves, skins on, on a large piece of foil.  Drizzle them with olive oil and then seal the foil around them.  If using the grill place the pouch along one side away from the direct heat.  If using the oven, place the pouch in the oven after removing the peppers and eggplants, close the door and turn off the heat.  The garlic will roast in the residual heat of the oven.  Turn the eggplants and peppers often.  As soon as the skins char and blister and the flesh softens, remove them to a bowl to cool.  Once all the eggplants and peppers are done cover the bowl with plastic to steam off the skins.  Once cool, strip off the skins and remove the seeds from the peppers.  Do the same with the eggplants but don't worry about removing every seed.  Just toss the big clumps. 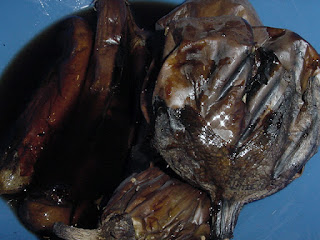 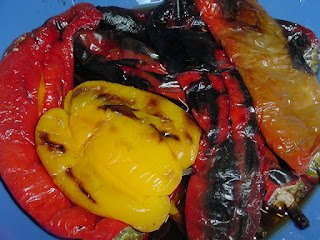 As soon as the garlic pokes tender remove it from the packet and allow to cool.  When cool, pinch the base of the cloves to push the roasted garlic out of the skins. 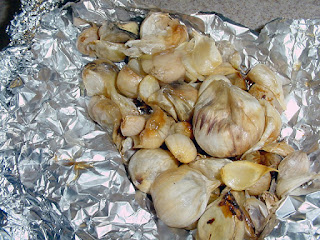 Put the eggplant in a food processor with about 2 tablespoons olive oil and the roasted garlic cloves. Whir until just barely pureed.  Remove the eggplant to a bowl. 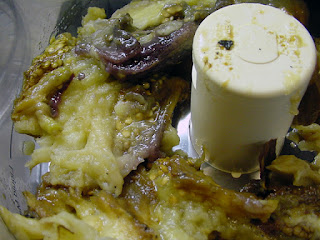 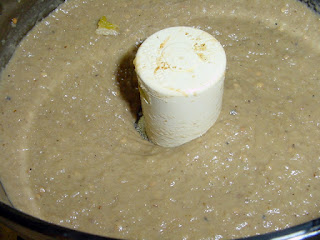 Add peppers to the food processor and again, whirl until just barely pureed. 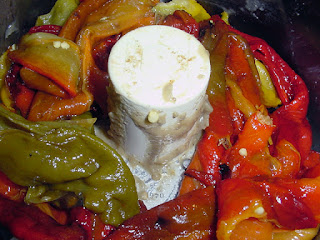 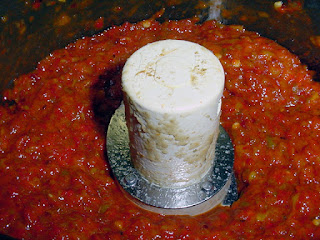 Mix the peppers with the eggplant puree, season to taste with salt, pepper, a splash of vinegar and a shake of dried chili flakes, if you like. 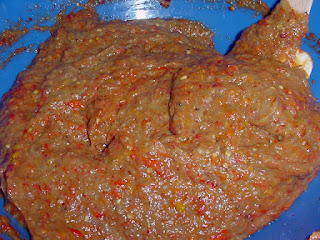 Spoon the ajvar into small freezer containers being sure to leave a little space for expansion as it freezes.  Label and date.

What I really like about this recipe is how customizable it is to your tastes.  Make it as mild or spicy as you like by choosing your peppers wisely.  Same with the garlic- a lot or a little. Make it even more earthy tasting with a little more eggplant.  Give it a tang by using a hearty cider or malt vinegar or just brighten the flavors with a hint of white wine or rice vinegar.  Sweeten it with a touch of balsamic.  But do try a batch. 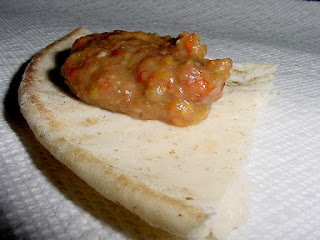