The summer that I began my food preservation adventures, bread and butter pickles was my second ever canned product, strawberry jam being the first.  Since then I have altered strawberry jam with all kinds of flavors but my bread and butter pickles recipe has never changed.  It's classic, versatile, friends get miffed if they don't get a jar.  The pickles are great straight, chopped into relish, made into tarter sauce or Thousand Island dressing.  My grandfather insisted the only ham salad worth eating was made from ground country ham, Helman's mayo, and finely chopped bread and butter pickles, no substitutions, no additions!  It's a winner. 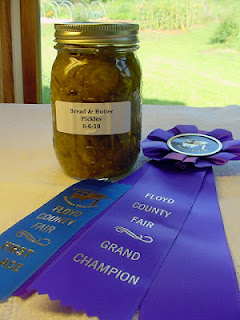 Back when I was first learning to can I had access to the farmer's market in Lewisburg, Pa which totally spoiled me for any farmer's market anywhere else.  I could get anything there from fresh from the field produce to bulk grains and staples, to spices.  There were butchers, fishmongers, cheesemongers, deli offerings, bakeries, candy makers, and more.  So while I always had a serious salad garden and an extensive culinary and medicinal herb garden, it was actually cheaper for me to purchase veggies for preserving in season from the people who grew them best.  Every time I break out this recipe, I see in my mind pictures of rows of canopies shading bushel baskets of cucumbers, bell peppers, and sacks of newly cured onions.  There's heaps of melons, tomatoes and summer squash, peaches and early apples, celery, green beans and herbs.  The market was there when my mother was a child and is still going strong.  I miss it.
****
Pickling cukes are your best choice for this recipe.  I grew a variety call "Homemade" this year.  In addition, the recipe calls for green bell peppers but I had a yellow bell and a partially ripened Golden Treasure in the fridge so I used those.  The onions are standard yellows. 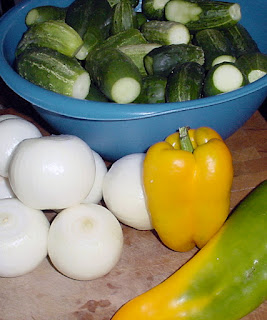 This is a mandoline.  It's not the musical kind.  This one is silent and deadly.  This slicer is, in my opinion, the most dangerous piece of equipment available to the home cook.  Or any cook. 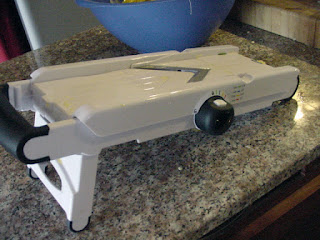 If you don't use the included safety equipment or, even with it, are inattentive or careless you can take off a fingertip and not even know it until you see the blood.  Trust me on this.  I've done it.  Always, always, always respect this slicer.  Used properly, this tool can do great things.  Especially if you use a dehydrator a lot. It's speciality is uniform slices of anything from paper thin to 1/2 inch thick.  It also does julienne, waffle, and fry cuts in various sizes.  But for most of the years that I've made this recipe the slicer blade of the food processor has worked just fine and is actually faster at completing the chore.  The slices just aren't as fine and uniform. 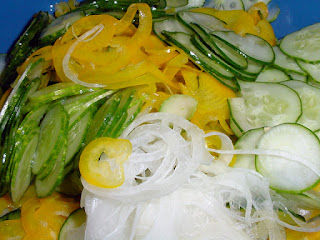 In a large non-reactive container, combine all the vegetables with the salt and allow to stand for 3 hours in a cool place.  Drain thoroughly. 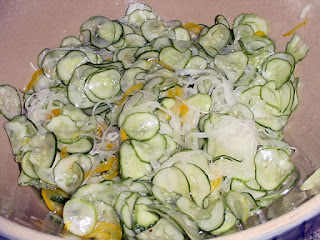 I combine the veggies in two large bowls and split the salt between them for this step.  This is actually quite the pile of veg and in order to combine them and mix the salt in thoroughly you need some bowl space.  After they've sat for a few hours and you drain them they'll fit easily into one bowl.  There will be a lot of liquid in the bowls.

In a large non-reactive pot, combine the sugar, vinegar, mustard seed, turmeric, and ground cloves.  Bring to a boil and then add drained vegetables.  Carefully heat the vegetables to scalding, stirring frequently,  but do not boil.  This is important!  Scalding will heat the pickles enough that the water bath will finish heating the veg to the center of the jar quickly thus ensuring food safety without overcooking.  Allowing the pickles to boil before packing will turn them to mush during processing.  Scalding is reached when the liquid around the edges of the pot just begins to form bubbles and there's lots of steam coming off the pot.

Pack while hot into hot jars leaving ¼” head space.  Adjust lids.  Process 5 minutes in a boiling water bath.  Adjust the length of processing time for your altitude.
Posted by Rebecca... at 12:08 PM